A respected entrepreneur with 25+ years of Experience, Amar Pandit is the Founder of several companies that are making a Happy difference in the lives of people. He is currently the Founder of Happyness Factory, a world-class online investment & goal-based financial planning platform through which he aims to help every Indian family save and invest wisely. He is very passionate about spreading financial literacy and is the author of 4 bestselling books (+ 2 more to release in 2020), 8 Sketch Books, Board Game and 700 + columns.

For many of us, the end of the year brings up these fancy feelings about New Year’s resolutions.

This year though, I decided to do something radical or different. Instead of waiting for the end of the year or the start of the New Year, I meditated or rather reflected on a fundamental question that I had written about last week –

“What’s the ONE THING I could do now that would have the biggest impact on my business and/or my life in the new year?”

By the end of my reflection on October 31st, I had made a resolution and set a challenging goal. However, I did not simply stop there. I then outlined a simple plan (a set of action plans that I need to do daily) with the start date as 1st November. I did not give myself a place to hide. I simply made a decision and got started.

What was that challenging goal?

It was shedding the excess unhealthy kilos (25 Kg) that I was carrying everywhere with me comfortably. The bigger objective though was to be the fittest I have ever been but more on this some other time. For the last 3 years, I was telling myself – “Amar, you are just fine. You have not put on much weight and most of it is muscle anyway. Take it easy.”

I was scared of even standing on the weighing scale because I knew the scale wouldn’t lie. Isn’t it much easier to lie to ourselves?

This is exactly what I was doing.

But that day, I said enough is enough. No more excuses. Just get started.

I started with a 5 Kilometre walk the next day – November 1st.

I made a promise to myself to walk every day and make this a part of my lifestyle (besides other things). While I continued for the next 12 days diligently, I fell sick on the 13th day. By then I was already walking 7 Km. I took the next 3 days off and resumed my walk shortly. Needless to say, I had started eating healthier meals (more on this some other day – this is an interesting story in itself). By the end of November, I was doing 9 Kilometres daily and I finished the month walking 180 Kilometres.

Instead of obsessing about my weight, I continued with this regime in December too. More importantly, for the first time in my life, I walked at least 9-10 Kilometres each day of the month and I had clocked 295 Kilometres by the end of December.

I had checked my weight initially at the start and I couldn’t even believe it. I stood on the scale a few times wearing different clothes to see if the number would be any different. I am not going to tell you the number, but I am going to drop a generous hint – I was very close to hitting a century and making a New Personal High like the Sensex.

Fast forward December 31st, and I have lost 14 Kilograms over the last 2 months. And I am super excited to continue this momentum and achieve my goal by March 2023.

Is there a point to be made here or is it just about patting my back?

There are actually a few interesting points to be made.

When I first started, it felt like a big victory if I could just do 5 Km. After a while, that became 7 Km. Then an hour and 30 minutes of walking. One day, almost without even noticing it, I was suddenly and comfortably able to clock 12 Km. and still feel energetic.

It felt sudden at the time, but, of course, it wasn’t.

This is the sneaky power of incremental change. You make a small improvement, that becomes the new normal, you get used to it.

You make a small improvement again. That becomes the new normal again. You get used to it again. On and on the cycle goes.

Second, because incremental change is so sneaky, we barely ever notice we are getting closer to our goal, and then (again, seemingly “all of a sudden”) we’re there! 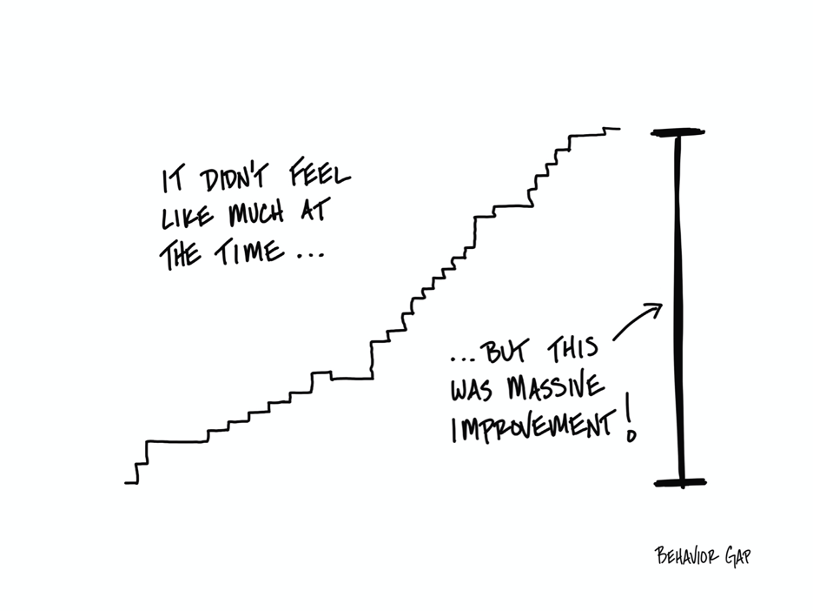 It didn’t feel like a lot initially because it wasn’t much… at least, not compared to yesterday or even last week. In fact, I walked just a little more (and faster) than I did a week before. But week after week, walk after walk, it all added up. All those little bits of “faster” started to compound on top of one another, and that is how I was able to make real progress. Incrementally.

Of course, this doesn’t just apply to just losing weight…

We all have things that we know if we did them, we would be better off.

But we don’t do them.

We have excuses ready. Just like I was not ready to look at the weighing scale, many of us don’t look at some of the most pressing things in our business. It’s far easier to not look at the real numbers that matter in our business. It’s easier to ignore things. It’s far easier to say – I am growing decently or that my firm should also be valued like Firm X. All is well – we convince ourselves.

“But seriously what’s the ONE THING you could do now that would have the biggest impact on my business and/or my life in the new year?”

This is that One Thing standing in your way.

It could have something to do with marketing, client communication, health… it’s something you know would have a massive impact if you did it.

For me, it was about my health.

For you, it could be anything such as –

“I want to write a blog post each week.”

“I am going to say NO to non-ideal prospects.”

“I am not going to waste my time lapping up all the market updates and commentaries.”

I certainly am going to make this my personal best. And I hope and wish the same for you too.

This Change will Future Proof your Business

Many of you wrote to me in response to my last Nano “Chief Change Officer”. The most common question was “What do I change?” I have written to each person individually with ....Read More

The 4 Signals for you in the COVID-19 world

I had written a post called “The difference between Signal and Noise that you must understand” a couple of months back. You should revisit this to first understand the differen ....Read More

In case you are wondering whether Upstreaming has anything to do with streaming, it does not. In fact, the post on happyrichinvestor.com today might have a little to do with stream ....Read More

Are you TAMPing it?

What do you make of this headline? Sounds nice but a little cryptic right. Well, my intention was to make you curious about the word TAMP. Does anything ring a bell yet? Instead of ....Read More

What type of Financial Professional are you?

It is 2021 yet it somehow feels like 2020 has not ended. The COVID-19 pandemic has changed the world, our lives, and the way we do business. There is a lot of discussion about the ....Read More